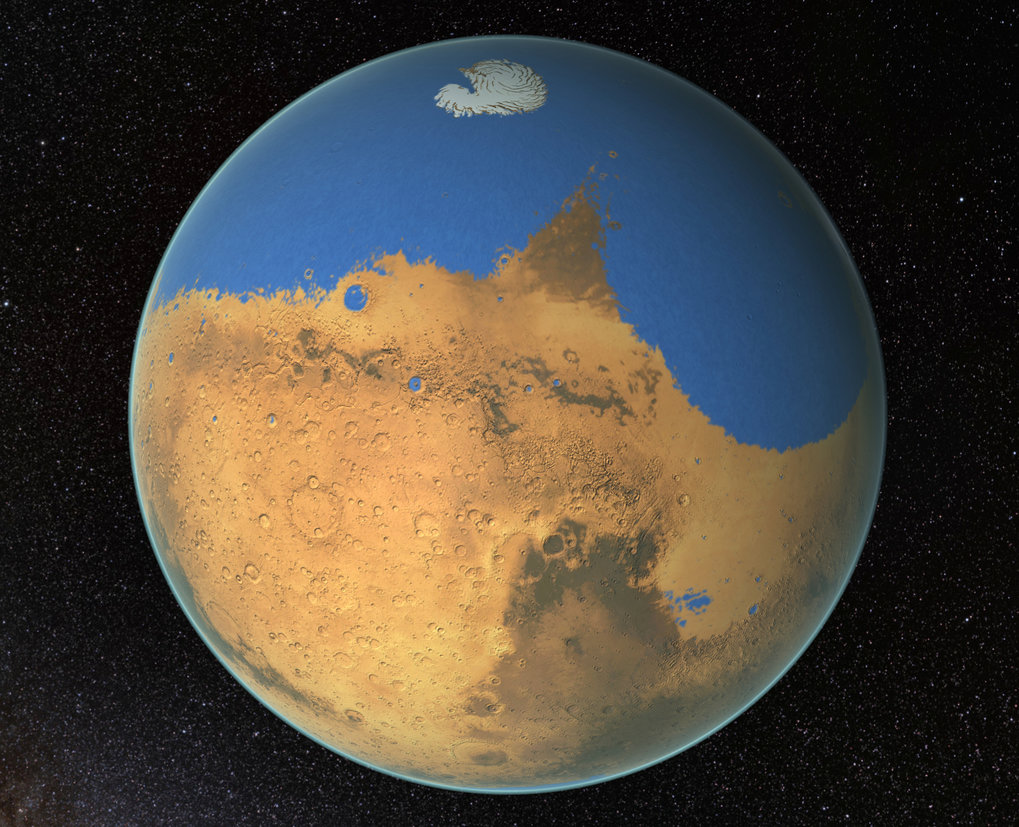 Billions of years ago, Mars could have looked like this with an ocean covering part of its surface.
© NASA/GSFC

Approximately every two Earth years, when it is summer on the southern hemisphere of Mars, a window opens: only there and only in this season can water vapor efficiently rise from the lower into the upper atmosphere. There, winds carry the rare gas to the North Pole. While part of the water vapor decays and escapes into space, the rest sinks back down near the poles. Researchers from the Moscow Institute of Physics and Technology and the Max Planck Institute for Solar System Research (MPS) in Germany describe this unusual Martian water cycle in a current issue of the Geophysical Research Letters. Their computer simulations show how water vapor overcomes the barrier of cold air in the middle atmosphere of Mars and reaches higher air layers. This could help to understand why Mars – unlike Earth – has lost most of its water.

Billions of years ago, Mars was a planet rich in water with rivers and even an ocean. Since then, our neighboring planet has changed dramatically: today, only small amounts of frozen water exist in the ground; in the atmosphere, water vapor occurs only in traces. All in all, the planet may have lost at least 80 percent of its original water. In the upper atmosphere of Mars, ultraviolet radiation from the Sun split water molecules into hydrogen (H) and hydroxyl radicals (OH). The hydrogen escaped from there irretrievably into space. Measurements by space probes and space telescopes show that even today water is still lost in this way. But how is this possible? The middle atmosphere layer of Mars, like Earth’s tropopause, should actually stop the rising gas. After all, this region is usually so cold that water vapor would turn to ice. How does the Martian water vapor reach the upper air layers?

In their current simulations, the Russian and German researchers find a previously unknown mechanism reminiscent of a kind of pump. Their model comprehensively describes the flows in the entire gas envelope surrounding Mars: from the surface to an altitude of 160 kilometers. The calculations show that the normally ice-cold middle atmosphere becomes permeable to water vapor twice a day – but only at a certain location and at a certain time of year.