Earth and Mars were formed from inner solar system material 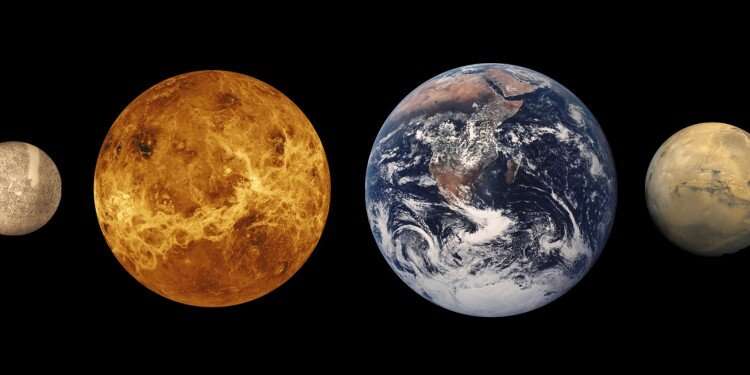 Earth and Mars were formed from material that largely originated in the inner solar system; only a few percent of the building blocks of these two planets originated beyond Jupiter’s orbit. A group of researchers led by the University of Münster (Germany) report these findings today in the journal Science Advances. They present the most comprehensive comparison to date of the isotopic composition of Earth, Mars and pristine building material from the inner and outer solar system. Some of this material is today still found largely unaltered in meteorites. The results of the study have far-reaching consequences for our understanding of the process that formed the planets Mercury, Venus, Earth, and Mars. The theory postulating that the four rocky planets grew to their present size by accumulating millimeter-sized dust pebbles from the outer solar system is not tenable.

Approximately 4.6 billion years ago, in the early days of our solar system, a disk of dust and gasses orbited the young sun. Two theories describe how, in the course of millions of years, the inner rocky planets formed from this original building material. According to the older theory, the dust in the inner solar system agglomerated to ever larger chunks gradually reaching approximately the size of our moon. Collisions of these planetary embryos finally produced the inner planets Mercury, Venus, Earth and Mars. A newer theory, however, prefers a different growth process: Millimeter-sized dust “pebbles” migrated from the outer solar system towards the sun. On their way, they were accreted onto the planetary embryos of the inner solar system, and step by step, enlarged them to their present size.