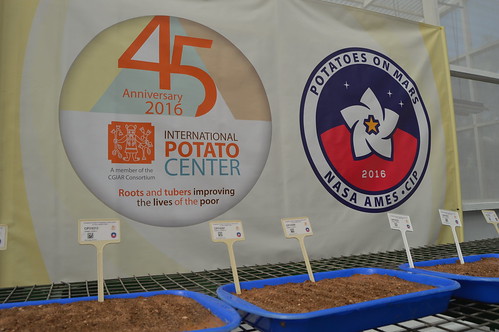 Lima (Peru) The International Potato Center (CIP) launched a series of experiments to discover if potatoes can grow under Mars atmospheric conditions and thereby prove they are also able to grow in extreme climates on Earth. This Phase Two effort of CIP’s proof of concept experiment to grow potatoes in simulated Martian conditions began on February 14, 2016 when a tuber was planted in a specially constructed CubeSat contained environment built by engineers from University of Engineering and Technology (UTEC) in Lima based upon designs and advice provided by the National Aeronautics and Space Administration in Ames Research Center (NASA ARC), California. Preliminary results are positive.

The Potatoes on Mars project was conceived by CIP to both understand how potatoes might grow in Mars conditions and also see how they survive in the extreme conditions similar to what parts of the world already suffering from climate change and weather shocks are already experiencing.
“Growing crops under Mars-like conditions is an important phase of this experiment,” says Julio Valdivia-Silva, a research associate with the SETI Institute who has worked at NASA’s Ames Research Center (NASA ARC) and now works at UTEC in Lima. “If the crops can tolerate the extreme conditions that we are exposing them to in our CubeSat, they have a good chance to grow on Mars. We will do several rounds of experiments to find out which potato varieties do best. “We want to know what the minimum conditions are that a potato needs to survive,” he said.