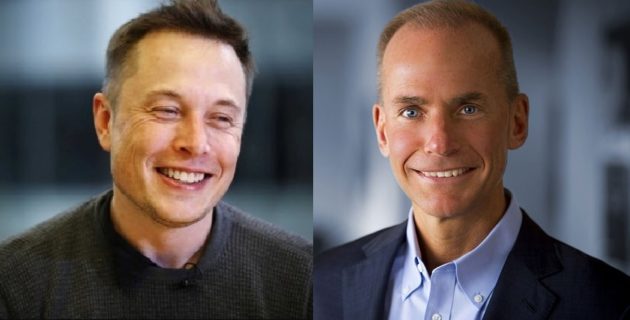 So what does SpaceX CEO Elon Musk think of Boeing CEO Dennis Muilenburg’s claim that the first people to set foot on Mars will arrive on a Boeing rocket? “Do it,” Musk tweeted, in one of many two-word comebacks that might have come to mind.

The latest round of media jousting started when CNBC’s Jim Cramer brought up Mars during an interview with Muilenburg. “Who’s going to get a man on Mars first, you or Elon Musk?” Cramer asked.

In response, Muilenburg touted the Space Launch System, the heavy-lift rocket that Boeing is helping NASA build for deep-space missions.

“We’re going to take a first test flight in 2019, and we’re going to do a slingshot mission around the moon,” he said. “Eventually, we’re going to go to Mars, and I firmly believe the first person that sets foot on Mars will get there on a Boeing rocket.”

Muilenburg said pretty much the same thing last year during an industry conference in Chicago, but since then, Musk has laid out a vision that calls for sending settlers to Mars on SpaceX’s yet-to-be-built monster spaceship starting in the 2020s.

If Musk and NASA stick to their current schedules, the first bootprints on the Martian surface would be left by folks arriving on a SpaceX rocket as much as a decade before the Space Launch System sends a spaceship there.