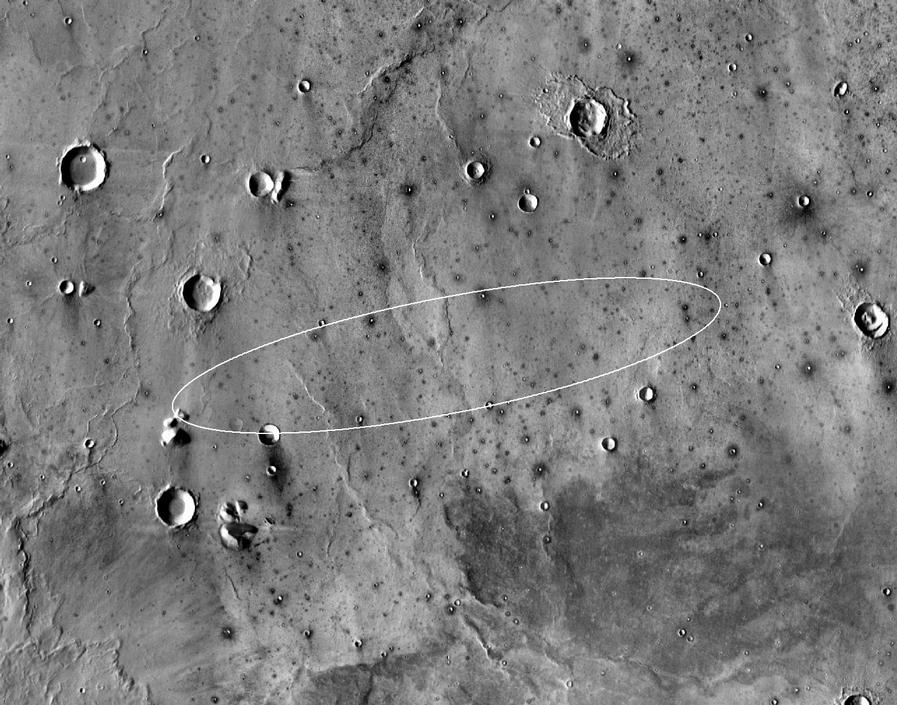 This map shows the single area under continuing evaluation as the InSight mission’s Mars landing site, as of a year before the mission’s May 2016 launch. The finalist ellipse marked is within the northern portion of flat-lying Elysium Planitia about four degrees north of Mars’ equator. Image credit: NASA/JPL-Caltech/ASU.

“Picking a good landing site on Mars is a lot like picking a good home: It’s all about location, location, location,” said Tom Hoffman, InSight project manager at JPL. “And for the first time ever, the evaluation for a Mars landing site had to consider what lay below the surface of Mars. We needed not just a safe place to land, but also a workspace that’s penetrable by our 16-foot-long (5-meter) heat-flow probe.”

The site also needs to be bright enough and warm enough to power the solar cells while keeping its electronics within temperature limits for an entire Martian year (26 Earth months).

So the team focused on a band around the equator, where the lander’s solar array would have adequate sunlight to power its systems year-round. Finding an area that would be safe enough for InSight to land and then deploy its solar panels and instruments without obstructions took a little longer.

“The site has to be a low-enough elevation to have sufficient atmosphere above it for a safe landing, because the spacecraft will rely first on atmospheric friction with its heat shield and then on a parachute digging into Mars’ tenuous atmosphere for a large portion of its deceleration,” said Hoffman. “And after the chute has fallen away and the braking rockets have kicked in for final descent, there needs to be a flat expanse to land on – not too undulating and relatively free of rocks that could tip the tri-legged Mars lander.”

Of 22 sites considered, only Elysium Planitia, Isidis Planitia and Valles Marineris met the basic engineering constraints. To grade the three remaining contenders, reconnaissance images from NASA’s Mars orbiters were scoured and weather records searched. Eventually, Isidis Planitia and Valles Marineris were ruled out for being too rocky and windy.

That left the 81-mile long, 17-mile-wide (130-kilometer-long, 27-kilometer-wide) landing ellipse on the western edge of a flat, smooth expanse of lava plain.