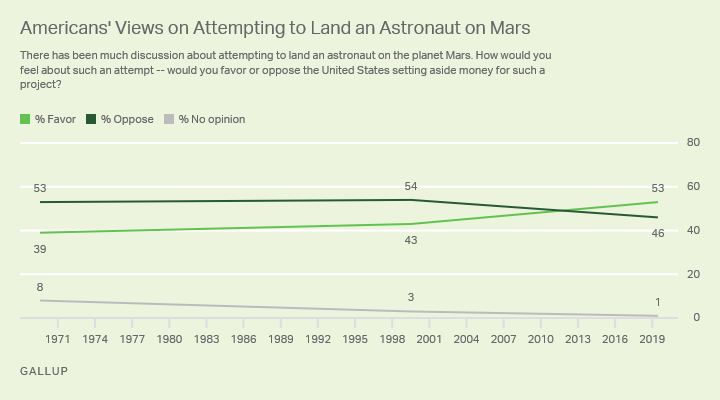 Americans’ views about landing an astronaut on Mars have shifted, with a majority now favoring the idea for the first time since 1969 and 1999, when majorities opposed the idea.

The latest figure comes as President Donald Trump has committed to a manned Mars mission. In his Fourth of July speech, the president said, “We’re going to be back on the moon … and, someday soon, we will plant the American flag on Mars.”

Gallup first asked Americans about attempting to land astronauts on Mars in 1969, shortly after the U.S. accomplished the same feat on the moon. At that time, just 39% were in favor and 53% opposed. A subsequent update on the 30th anniversary of the moon landing found public opinion had changed little, with 43% in favor and 54% opposed to going to Mars.

The recent increase in support for putting an astronaut on Mars is consistent with Americans’ more positive views of the U.S. space program, just ahead of the 50th anniversary of the moon landing.

As was the case 20 years ago, support for a manned Mars mission is highest among young adults aged 18 to 29 (65%) and lowest among adults aged 65 and older (46%). But support has increased substantially among older adults — as well as younger adults, to a smaller degree — thus boosting the national average.