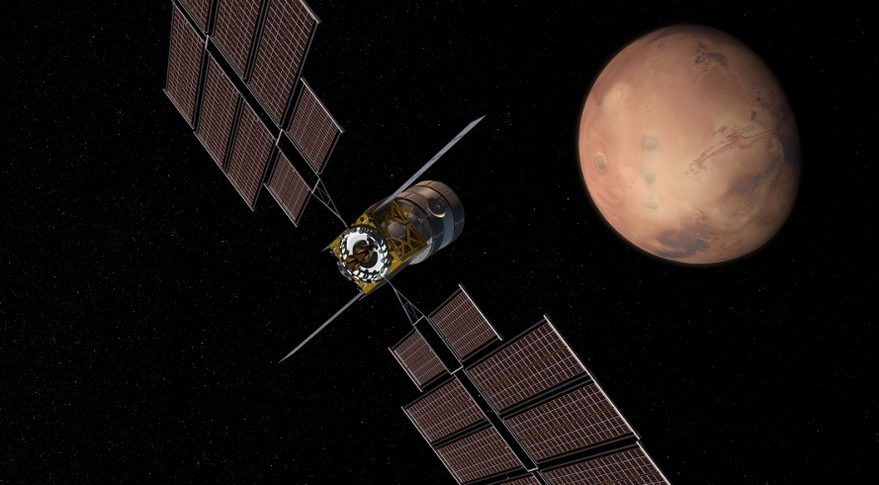 One concept for a Deep Space Transport spacecraft that would take astronauts to and from Mars. An independent study concluded the technological challenges of such a spacecraft made plans to mount a human Mars mission in 2033 infeasible. Credit: Boeing

An independent report concluded that NASA has no chance of sending humans to Mars by 2033, with the earliest such a mission could be flown being the late 2030s.

The report, while completed prior to the March 26 speech where Vice President Mike Pence directed NASA to return humans to the moon by 2024, does offer insights into how much a lunar return might cost and how it fits into long-term plans to send humans to Mars.

NASA contracted with the Science and Technology Policy Institute (STPI) to prepare the report, which Congress directed NASA to perform in the 2017 NASA authorization act. That bill called specifically for a technical and financial assessment of “a Mars human space flight mission to be launched in 2033.”

STPI, at NASA’s direction, used the strategy the agency had laid out in its “Exploration Campaign” report, which projects the continued use of the Space Launch System and Orion and development of the lunar Gateway in the 2020s. That would be followed by the Deep Space Transport (DST), a crewed spacecraft that would travel from cislunar space to Mars and back. NASA would also develop lunar landers are related system to support crewed missions to the lunar surface, while also working on systems for later missions to the surface of Mars.

That work, the STPI report concluded, will take too long to complete in time to support a 2033 mission. “We find that even without budget constraints, a Mars 2033 orbital mission cannot be realistically scheduled under NASA’s current and notional plans,” the report states. “Our analysis suggests that a Mars orbital mission could be carried out no earlier than the 2037 orbital window without accepting large technology development, schedule delay, cost overrun, and budget shortfall risks.”