Device seeks to brew oxygen on Mars from dangerous salt 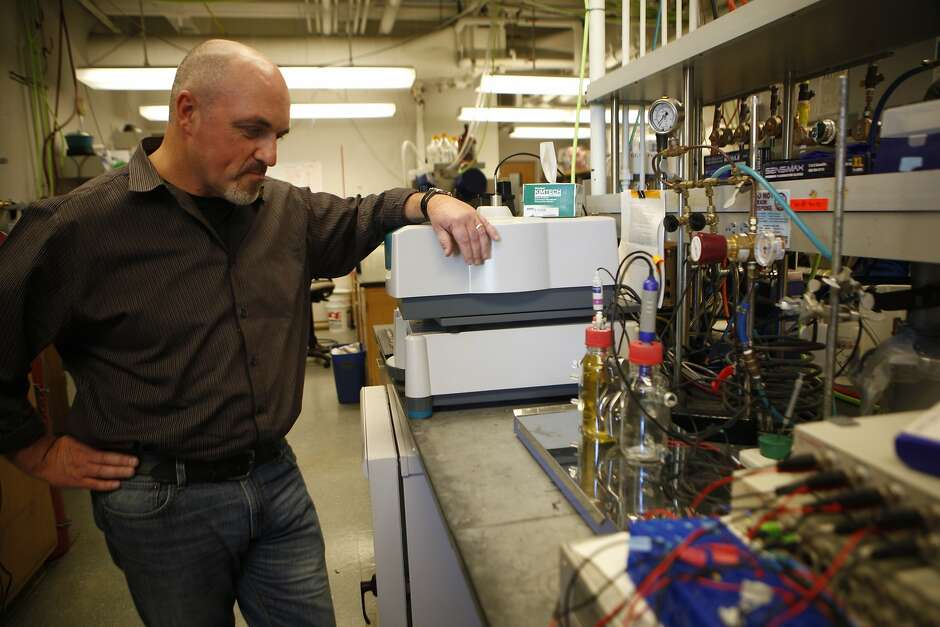 Professor John Coates, PhD, describing the process of how the device works with the two chambers separating the oxygen from the water using electricity and a Chlorate solution at the Coates Lab at UC Berkeley on October 20.2015.
Photo: Franchon Smith, The Chronicle

Having discovered flowing, liquid water on the once-imagined arid surface of Mars, NASA scientists are looking to the next missing element needed for human habitability on the Red Planet: oxygen.

Finding a way to produce oxygen on the planet is vital if the space agency is to fulfill its goal of sending humans to Mars sometime during the 2030s, they say.

They have considered sending microbes on the journey to fill large bio domes to be built by the astronauts on the planet’s surface. Another idea they’ve pondered is sending along a large machine to split up the oxygen-containing carbon dioxide that makes up most of Mars’ thin atmosphere.

Then there is the Bay Area scientist who has NASA’s ear with his idea that a dangerous salt compound believed to exist on Mars’ surface can be converted into breathable oxygen.

The compound, a perchlorate, is known to be a threat to human health on Earth, interfering with the production of human growth hormones.

John Coates, a microbiologist at UC Berkeley, has patented a mechanism he says can turn the perchlorate into oxygen fit for humans. Throughout the development process, he consulted NASA scientists who see Coates’ invention as a partial answer to the oxygen issue, but not the entire solution.

“What happens if astronauts are 10 miles from home (base) and they have a big problem and need oxygen? That is the niche that the perchlorate would fill,” said Chris McKay, a planetary scientist at NASA Ames Research Center in Mountain View. “When you are (on Mars) out in middle of nowhere, scooping up a bag of dirt to produce oxygen would be easy to do.”