Europe presses ahead with Mars rover 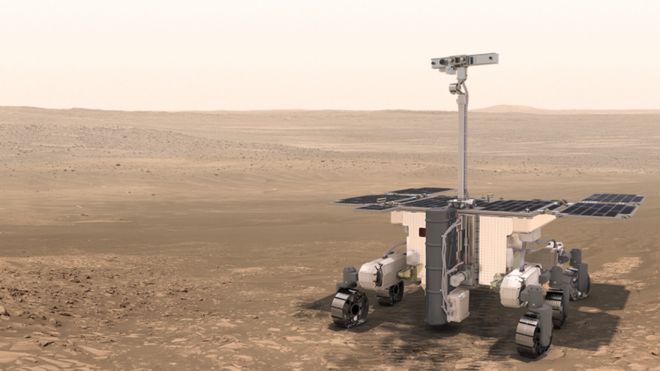 Europe will push ahead with its plan to put a UK-assembled robotic rover on the surface of Mars in 2021.

Research ministers meeting in Lucerne, Switzerland, have agreed to stump up the outstanding €436m euros needed to take the project through to completion.

The mission is late and is costing far more than originally envisaged, prompting fears that European Space Agency member states might abandon it.

But the ministers have emphatically reaffirmed their commitment to it.

They have also said that European participation in the International Space Station (ISS) should run until at least 2024, bringing Esa into line with its partners on the orbiting laboratory – the US, Russia, Japan and Canada.

This will open new opportunities for European astronauts to visit the station, and it was announced here that Italian Luca Parmitano has been proposed to take up a tour in 2019.

The Ministerial Council was convened to set the policies, programmes and funding for ESA over the next three to five years. In case Schiaparelli’s crash-landing left you thinking the European Space Agency’s ExoMars mission was a bust, rest assured it wasn’t. The mission’s scientific workhorse—its Trace Gas Orbiter (TGO)—is performing beautifully, as evidenced by the first images and splashes of data ESA has now received back from the Red Planet.

In keeping with ExoMars’ goal of discovering signs of life, the TGO’s agenda is to produce a detailed inventory of rare gases in Mars’ lower atmosphere. These include water vapor, nitrogen dioxide, acetylene, and most importantly, methane, which is broken apart by sunlight. If methane is present in Martian air, something—either a biological or geological process—is resupplying it.

The TGO is also equipped with state-of-the-art imaging equipment. If it does sniff something interesting, ESA will take detailed photos of the corresponding spot on the surface, so that a future rover can pay a visit. Illustration showing the moment the Schiaparelli lander was to jettison its back shell and parachute and ignite its descent engines. A preliminary analysis suggests this stage happened prematurely, likely the result of a software error. (Image: ESA/ATG Medialab)

Photos of a huge circle of churned-up Martian soil leave few doubts: a European Space Agency (ESA) probe that was supposed to test landing technology on Mars crashed into the red planet instead, and may have exploded on impact.

Mars-probe loss is a chance for ESA to learn

The events of 19 October may be painful for ESA scientists to recall, but they will now have to relive them over and over again in computer simulations. The lander, called Schiaparelli, was part of ESA’s ExoMars mission, which is being conducted jointly with the Russian Space Agency Roscosmos. It was a prelude to a planned 2020 mission, when researchers aim to land a much larger scientific station and rover on Mars, which will drill up to 2-metres down to look for signs of ancient life in the planet’s soil. Figuring out Schiaparelli’s faults and rectifying them is a priority, says Jorge Vago, project scientist for ExoMars. “That’s super important. I think it’s on everybody’s mind.”

NASA’s Mars Reconnaissance Orbiter has identified new markings on the surface of the Red Planet that are believed to be related to ESA’s ExoMars Schiaparelli entry, descent and landing technology demonstrator module.

Schiaparelli entered the martian atmosphere at 14:42 GMT on 19 October for its 6-minute descent to the surface, but contact was lost shortly before expected touchdown. Data recorded by its mothership, the Trace Gas Orbiter, are currently being analysed to understand what happened during the descent sequence.

In the meantime, the low-resolution CTX camera on-board the Mars Reconnaissance Orbiter (MRO) took pictures of the expected touchdown site in Meridiani Planum on 20 October as part of a planned imaging campaign.

Estimates are that Schiaparelli dropped from a height of between 2 and 4 kilometres, therefore impacting at a considerable speed, greater than 300 km/h. The relatively large size of the feature would then arise from disturbed surface material. It is also possible that the lander exploded on impact, as its thruster propellant tanks were likely still full. These preliminary interpretations will be refined following further analysis. The European space probe Schiaparelli may have crash landed on Mars after suffering problems releasing its parachute and firing retrorockets to slow its descent, it emerged today.

At a briefing this morning, the European Space Agency (ESA) said there had been technical failings in the final 30 seconds before landing.

Schiaparelli’s touchdown was supposed to prove that the ESA had the capability to land on Mars ahead of the second part of the ExoMars mission to place a rover on the planet in 2020, which will drill into the surface looking for signs of life on the Red Planet.

But there were fears that the problems could impact future funding. European ministers will meet later this year to decide whether to give the green light to the 2020 mission.

Andrea Acoomazzo, ESA Spacecraft Operations Manager, said that everything had gone to plan for the first five and a half minutes of descent but then events ‘diverged from what was expected’ during ejection of the parachute and heat shield. The Trace Gas Orbiter (TGO) of ESA’s ExoMars 2016 has successfully performed the long 139-minute burn required to be captured by Mars and entered an elliptical orbit around the Red Planet, while contact has not yet been confirmed with the mission’s test lander from the surface.

TGO’s Mars orbit Insertion burn lasted from 13:05 to 15:24 GMT on 19 October, reducing the spacecraft’s speed and direction by more than 1.5 km/s. The TGO is now on its planned orbit around Mars. European Space Agency teams at the European Space Operations Centre (ESOC) in Darmstadt, Germany, continue to monitor the good health of their second orbiter around Mars, which joins the 13-year old Mars Express.

The ESOC teams are trying to confirm contact with the Entry, Descent & Landing Demonstrator Module (EDM), Schiaparelli, which entered the Martian atmosphere some 107 minutes after TGO started its own orbit insertion manoeuvre.

19 October – landing and arriving at Mars

The ESA TV programme will be broadcast on this page in two parts on 19 October:

Ready for the Red Planet This week, ESA’s ExoMars has just a single chance to get captured by Mars’ gravity. The spacecraft and the mission controllers who will make it so are ready for arrival.

The ExoMars Trace Gas Orbiter is on a multiyear mission to understand the methane and other gases in Mars’ atmosphere at low levels and could be evidence for possible biological or geological activity.

The 3.7 tonne mothership is carrying the 577 kg Schiaparelli lander that will test key technologies in preparation for ESA’s 2020 rover mission.

The pair have almost completed their 496 million km journey, and are now speeding towards a critical stage: releasing the lander on Sunday and the lander’s descent and touchdown next Wednesday, at the same time as the main craft begins circling the planet.

“They are now on a high-speed collision course with Mars, which is fine for the lander – it will stay on this path to make its controlled landing,” says flight director Michel Denis at mission control in Darmstadt, Germany.

“However, to get the mothership into orbit, we must make a small but vital adjustment on 17 October to ensure it avoids the planet. And on 19 October it must fire its engine at a precise time for 139 minutes to brake into orbit.

“We get just a single chance.”