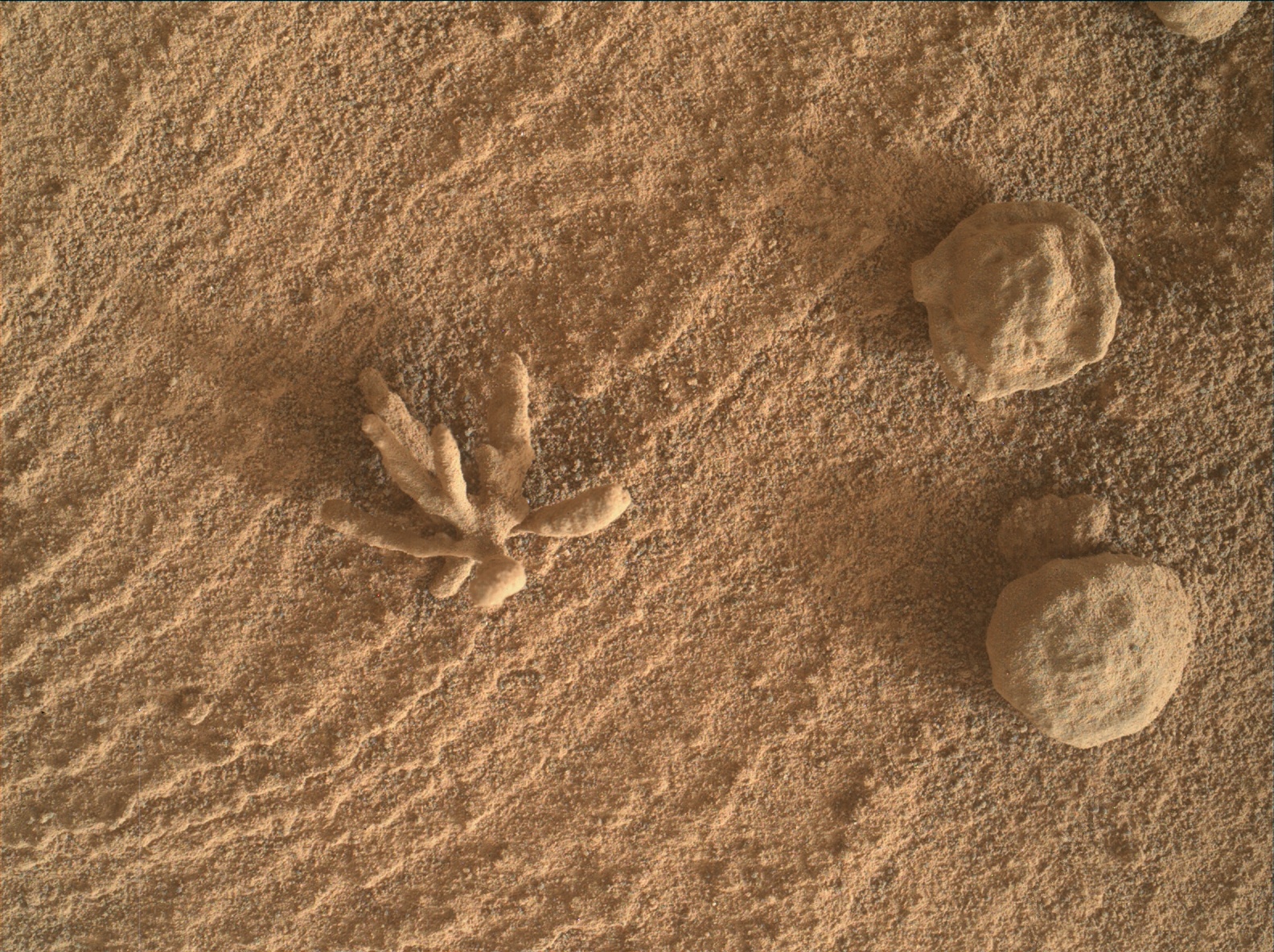 These tiny mineral formations give us a close-up look at the details of the surface of Mars as seen by NASA’s Curiosity rover. NASA/JPL-Caltech/MSSS

Hello, beautiful! NASA’s Curiosity rover snapped a gorgeous, delicate formation on Mars that looks like it could be a branching piece of ocean coral. It’s not coral, but it’s worth contemplating how we see familiar Earth objects in random shapes on Mars.

The miniscule Martian sculpture invites poetic comparisons. It resembles a water droplet captured at the moment of explosion against a surface, or the tendrils of an anemone in a tide pool.

Curiosity’s MAHLI camera snapped this view of one of the rover’s wheels in late January 2022.

Just like I inspect the bottom of my hiking boots from time to time, NASA’s Curiosity rover schedules in regular check-ups of its wheel treads. Mars hasn’t been kind to the rover’s aluminum wheels, which have taken a serious beating from rocks since it started exploring Gale Crater in 2012.

Curiosity snapped some fresh looks at its kicks in late January, and the views led to some concerned social media discussions (and some humorous ones) about the state of the wheels and what it means for the rover’s ability to rove. Good news: Curiosity is doing OK.

The wheel image that attracted the most attention is quite a looker. It shows multiple holes and broken grousers (raised treads), cracks and bent metal. If your car tire looked like that, you’d be breaking out the jack and the spare. But the wheel issues have been known for a long time and the Curiosity team already implemented mitigation measures to extend their life.

Will NASA’s Curiosity Rover Die On This Hill? View of a potentially passable route onto the top of the Greenheugh pediment. (Area on the left).
Credits: NASA/JPL-Caltech.

NASA’s Curiosity rover may have just found the ultimate shortcut on Mars.

Rather than driving downhill to reach its designated location on Mars’ Greenheugh pediment, a journey that may take up to several months or even years, the rover will instead journey its way uphill and take a path that has never been driven by a NASA rover before.

The new path would get the rover to its new destination way ahead of schedule. And should the little rover find itself at risk, it would simply turn back and follow the longer route.

The Curiosity rover was parked at a drill site by the Hutton crater on the Red Planet where it was analyzing samples that it had dug up. Next up on its exploration to-do-list was to get to the Greenheugh pediment. 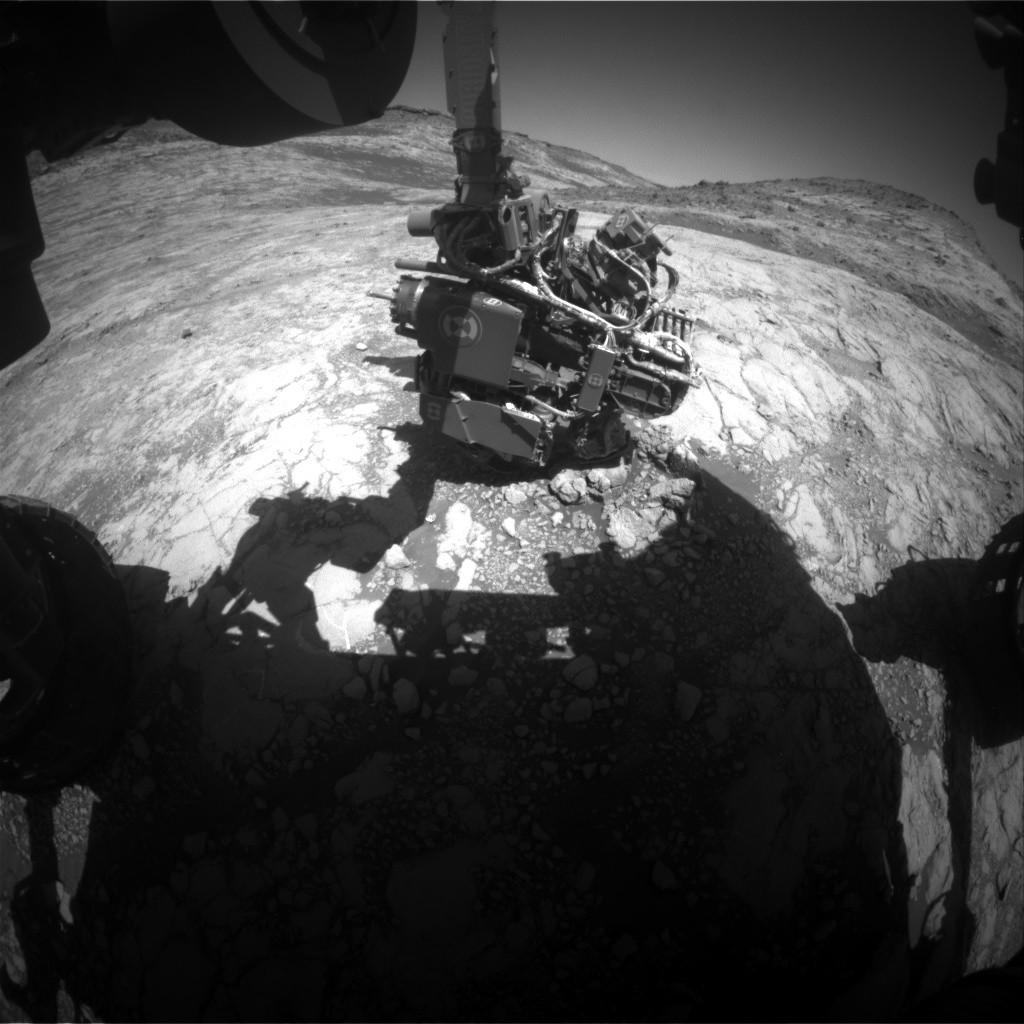 This Hazcam image shows Curiosity’s arm extended out to perform an APXS analysis of the bedrock. Curiosity has to know the exact angle of every joint to move safely. Credit: NASA/JPL-Caltech

Can a Mars rover have an existential crisis? NASA’s Curiosity rover was wondering just exactly what its place is on Mars after experiencing a technical glitch.

“Partway through its last set of activities, Curiosity lost its orientation,” wrote Curiosity team member Dawn Sumner, a planetary geologist at University of California, Davis, in a mission update this week.

The rover stores in memory its body attitude and joint orientation. This includes details of the local landscape, the location of its robotic arm and the directions its instruments are pointing. It’s all the data that helps the rover know exactly where it is on Mars and how to move about safely. 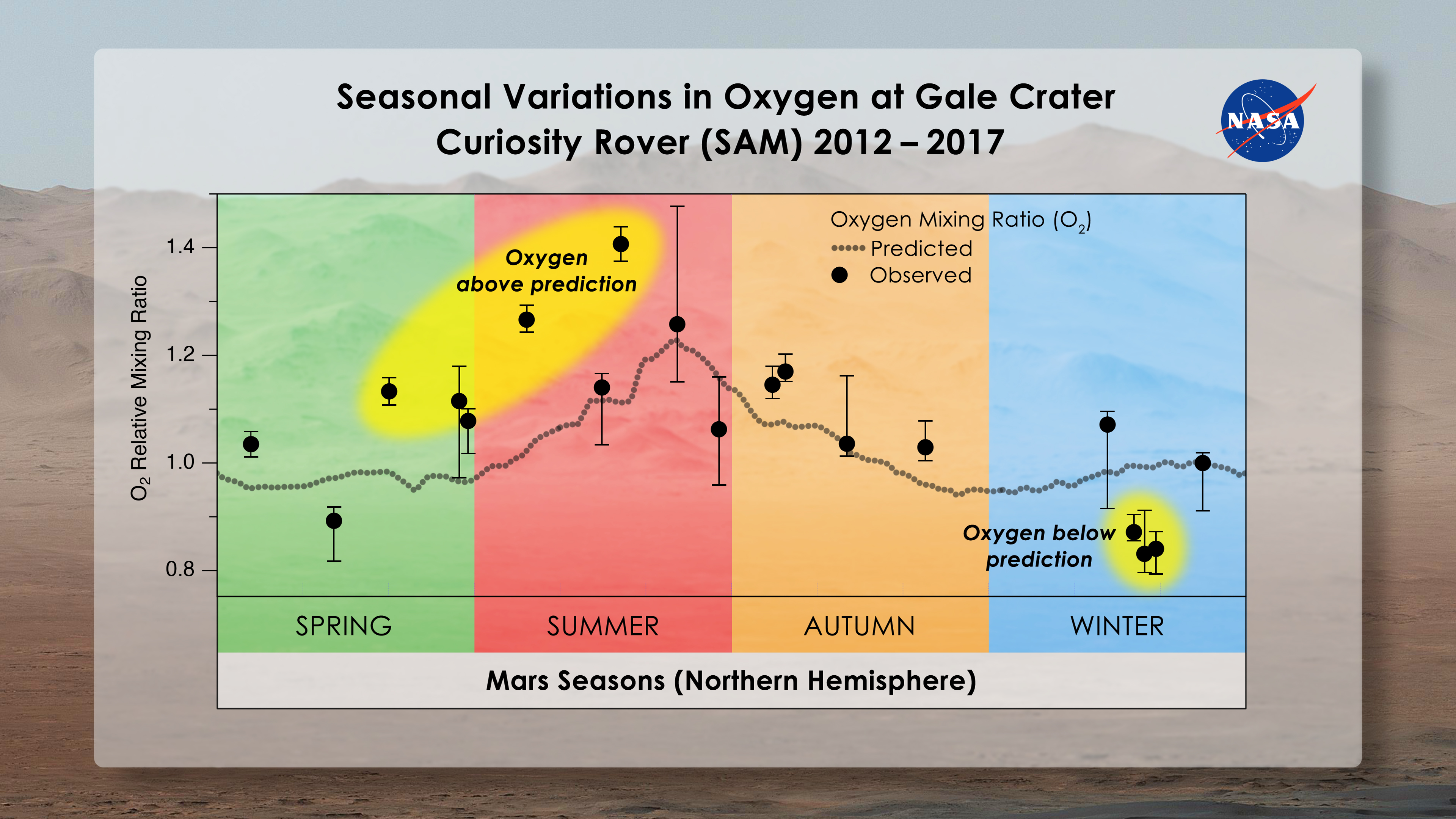 For the first time in the history of space exploration, scientists have measured the seasonal changes in the gases that fill the air directly above the surface of Gale Crater on Mars. As a result, they noticed something baffling: oxygen, the gas many Earth creatures use to breathe, behaves in a way that so far scientists cannot explain through any known chemical processes.

Over the course of three Mars years (or nearly six Earth years) an instrument in the Sample Analysis at Mars (SAM) portable chemistry lab inside the belly of NASA’s Curiosity rover inhaled the air of Gale Crater and analyzed its composition. The results SAM spit out confirmed the makeup of the Martian atmosphere at the surface: 95% by volume of carbon dioxide (CO2), 2.6% molecular nitrogen (N2), 1.9% argon (Ar), 0.16% molecular oxygen (O2), and 0.06% carbon monoxide (CO). They also revealed how the molecules in the Martian air mix and circulate with the changes in air pressure throughout the year. These changes are caused when CO2 gas freezes over the poles in the winter, thereby lowering the air pressure across the planet following redistribution of air to maintain pressure equilibrium. When CO2 evaporates in the spring and summer and mixes across Mars, it raises the air pressure.

Within this environment, scientists found that nitrogen and argon follow a predictable seasonal pattern, waxing and waning in concentration in Gale Crater throughout the year relative to how much CO2 is in the air. They expected oxygen to do the same. But it didn’t. Instead, the amount of the gas in the air rose throughout spring and summer by as much as 30%, and then dropped back to levels predicted by known chemistry in fall. This pattern repeated each spring, though the amount of oxygen added to the atmosphere varied, implying that something was producing it and then taking it away. 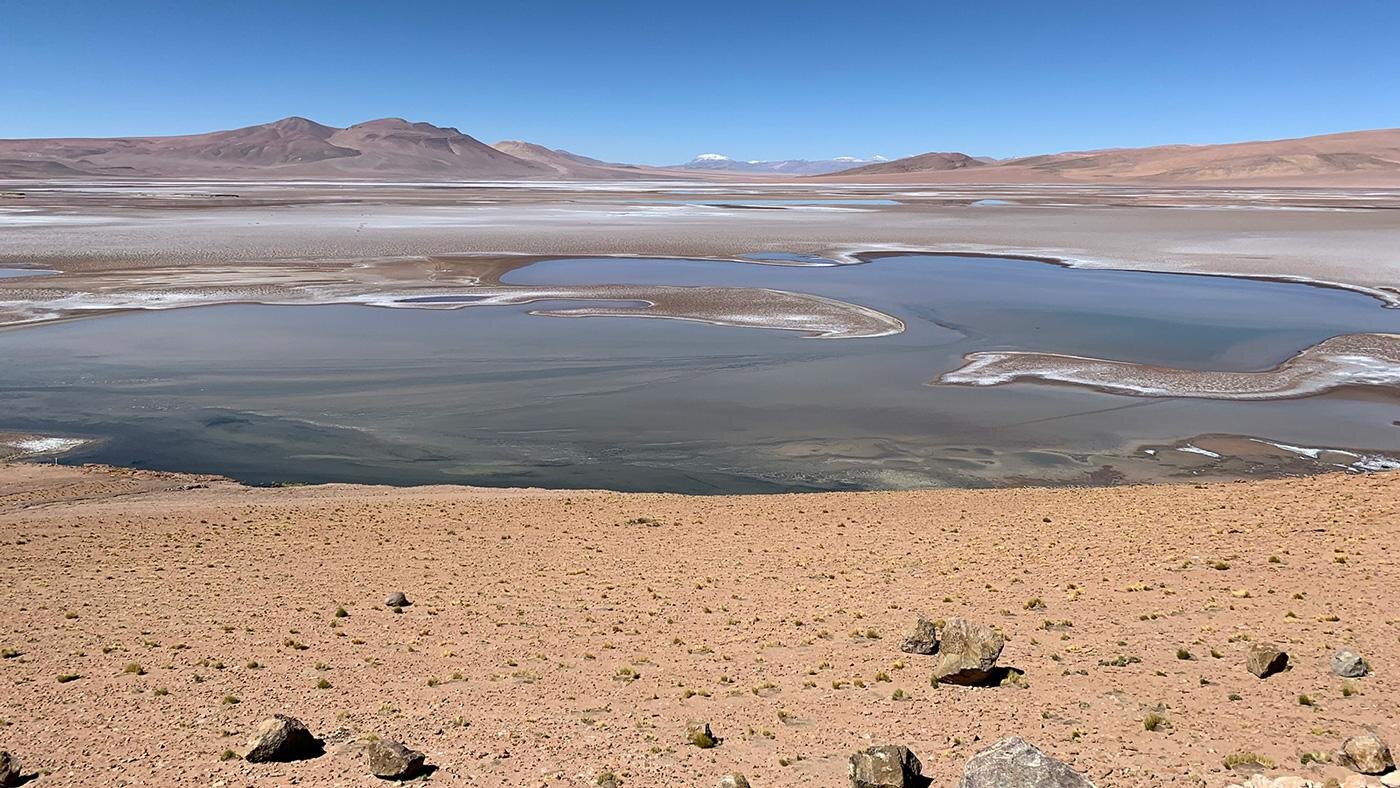 Filled with briny lakes, the Quisquiro salt flat in South America’s Altiplano represents the kind of landscape that scientists think may have existed in Gale Crater, which NASA’s Curiosity rover is exploring. Credit: Maksym Bocharov

If you could travel back in time 3.5 billion years, what would Mars look like? The picture is evolving among scientists working with NASA’s Curiosity rover.

Imagine ponds dotting the floor of Gale Crater, the 100-mile-wide (150-kilometer-wide) ancient basin that Curiosity is exploring. Streams might have laced the crater’s walls, running toward its base. Watch history in fast forward, and you’d see these waterways overflow then dry up, a cycle that probably repeated itself numerous times over millions of years.

That is the landscape described by Curiosity scientists in a Nature Geoscience paper published today. The authors interpret rocks enriched in mineral salts discovered by the rover as evidence of shallow briny ponds that went through episodes of overflow and drying. The deposits serve as a watermark created by climate fluctuations as the Martian environment transitioned from a wetter one to the freezing desert it is today.

Scientists would like to understand how long this transition took and when exactly it occurred. This latest clue may be a sign of findings to come as Curiosity heads toward a region called the “sulfate-bearing unit,” which is expected to have formed in an even drier environment. It represents a stark difference from lower down the mountain, where Curiosity discovered evidence of persistent freshwater lakes. The Curiosity rover’s wheel has some damage in this image from July 7. NASA/JPL-Caltech/MSSS

NASA’s Curiosity rover is equipped with tough aluminum wheels, but they’re not getting off easy on Mars. The red planet’s rocky landscape continues to take a toll on the rover, as new images of wheel damage show.

The rover used the Mars Hand Lens Imager (MAHLI) camera on the the end of its robotic arm to take a close look at its wheels on July 7. This is pretty much the rover equivalent of inspecting the bottom of your boots after going for a rocky hike.

The wheels are dented and pockmarked from traversing rough ground. What’s most concerning are the many cracks and outright holes visible across the treads.

While the damage looks scary, the wheels are actually doing a pretty good job of hanging in there.

“Although the wheels have developed some holes, the testing and modeling that have been done since early 2014 indicate that Curiosity can still travel a number of kilometers on these wheels,” Curiosity team member Roger Craig Wiens wrote in a mission update.

The rover has traveled 12.99 miles (20.91 kilometers) since reaching Mars in 2012, so the wheels should still be serviceable for quite some time.

Just imagine this scene. You’re on Mars, in Gale crater, with Curiosity. The sun has just set, and the temperature is falling rapidly. You look up. You see brilliant, wispy clouds, still sunlit even though night has fallen where you’re standing. They’re high in elevation, so the Sun can still reach them. As you stand there, skygazing, feeling increasingly chilled, the noctilucent clouds waft along in the Martian air, dimming from east to west as the Sun sets on them.

Curiosity has, in fact, been looking up after sunset recently. It’s been taking Navcam photos, and the camera’s reasonably broad field of view (45 degrees) lets it take in a lot of clouds, giving all of us back on Earth a chance to see them, too.

Curiosity Observes Phobos Eclipse: Sol 2359: This series of images shows the Martian moon Phobos as it crossed in front of the Sun, as seen by NASA’s Curiosity Mars rover on Tuesday, March 26, 2019 (Sol 2359). Image credit: NASA/JPL-Caltech/MSSS

When NASA’s Curiosity Mars rover landed in 2012, it brought along eclipse glasses. The solar filters on its Mast Camera (Mastcam) allow it to stare directly at the Sun. Over the past few weeks, Curiosity has been putting them to good use by sending back some spectacular imagery of solar eclipses caused by Phobos and Deimos, Mars’ two moons.

Phobos, which is about 7 miles (11.5 kilometers) across, was imaged on March 26, 2019 (the 2,359th sol, or Martian day, of Curiosity’s mission); Deimos, which is about 1.5 miles (2.3 kilometers) across, was photographed on March 17, 2019 (Sol 2350). Phobos doesn’t completely cover the Sun, so it would be considered an annular eclipse. Because Deimos is so small compared to the disk of the Sun, scientists would say it’s transiting the Sun.

In addition to capturing each moon crossing in front of the Sun, one of Curiosity’s Navigation Cameras (Navcams) observed the shadow of Phobos on March 25, 2019 (Sol 2358). As the moon’s shadow passed over the rover during sunset, it momentarily darkened the light. A reanalysis of data collected by ESA’s Mars Express during the first 20 months of NASA’s Curiosity mission found one case of correlated methane detection, the first time an in-situ measurement has been independently confirmed from orbit.

Reports of methane in the martian atmosphere have been intensely debated, with Mars Express contributing one of the first measurements from orbit in 2004, shortly after its arrival at the Red Planet.

The molecule attracts such attention because on Earth methane is generated by living organisms, as well as geological processes. Because it can be destroyed quickly by atmospheric processes, any detection of the molecule in the martian atmosphere means it must have been released relatively recently – even if the methane itself was produced millions or billions of years ago and lay trapped in underground reservoirs until now.

While spacecraft and telescopic observations from Earth have in general reported no or very low detections of methane, or measurements right at the limit of the instruments’ capabilities, a handful of spurious spikes, along with Curiosity’s reported seasonal variation at its location in Gale Crater, raise the exciting question of how it is being generated and destroyed in present times.

Now, for the first time, a strong signal measured by the Curiosity rover on 15 June 2013 is backed up by an independent observation by the Planetary Fourier Spectrometer (PFS) onboard Mars Express the next day, as the spacecraft flew over Gale Crater.