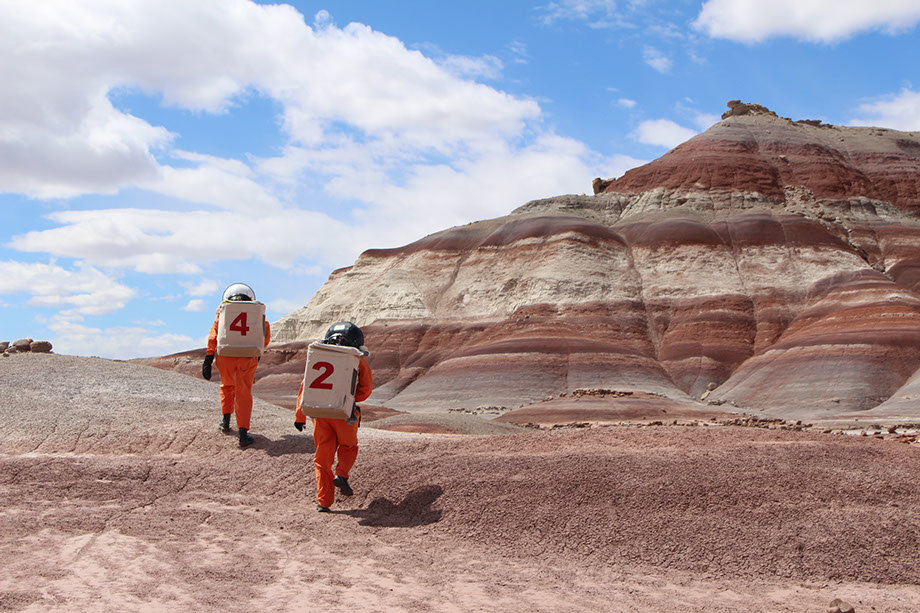 If you had to live the rest of your life on Mars, what would you miss the most? Figuring out how we could we be comfortable living on the red planet is a challenge but with increasing discussion about how to send people to Mars with the ultimate aim of colonising the planet, how to replace the sensation of the sunshine on your face or the grass beneath your feet is prescient one.

Luckily there is no shortage of expertise. On May 16, 2018, I organised a workshop at the University of Bristol in collaboration with local artists Ella Good and Nicki Kent to come up with a plan for building a Martian house here on Earth. The project is part of a large-scale public art work, with a plan to designing the house before building it in 2019. We have already identified five key things to do, taking inspiration from research facilities such as Biosphere 2 and the Mars Desert Research Station in Utah, US.

Ikea is looking to space for inspiration–literally. The furniture company announced last week that it will be collaborating with NASA in order to learn about what life would be like on Mars, and how the company might apply the space agency’s knowledge of living in small spaces to its products.

For the company’s designers to understand what it might be like to live on Mars, Ikea sent five people to live for three days inside a model Mars habitation in the Utah desert. Built in 2001 by the Mars Society–an advocacy group dedicated to helping humans get to Mars–the Mars Desert Research Station hosts scientists and students for two to three weeks at a time, allowing them to simulate what life might be like on the red planet next door. The Ikea team went through a three-day version of a Mars simulation with the engineer and space architect Constance Adams, with lectures, daily routines, and even an excursion outside the building to see what working on the planet’s surface might be like.

To prepare for life on Mars, astronauts are going to … Utah?

This is the true story of six scientists, picked to live in a capsule in the middle of the Utah desert, work together and have their lives studied, to find out what happens when people stop being Earthlings and start being Martians.

While it’s too soon to say whether the crew of a certain long-running MTV reality show will make Mars its next setting, one thing’s for certain: if humans are really going to live on the Red Planet one day, we need to know exactly how that’s going to look. That’s where Team PRIMA 173 comes in. It’s a group of six highly qualified scientists, engineers, artists and leadership experts from around the world. Among the crew: Michaela Musilova, an astrobiologist from Slovakia; Arnau Pons, an aeronautical engineer from Spain; Roy Naor, a graduate student in planetary geology from Israel; and Niamh Shaw, an artist and journalist from Ireland.

They’ve all been selected by the Mars Society to take part in a scientific simulation project at the Mars Desert Research Station near Hanksville, Utah.

Four extreme environments where humans are tasting life on Mars

No spot on Earth is a perfect match for Mars, but by training at some of Earth’s extreme habitats, space agencies including NASA and ESA are fine-tuning techniques for a trip to the Red Planet. New Scientist gathered postcards from four of them

A Dress Rehearsal For Life on Mars 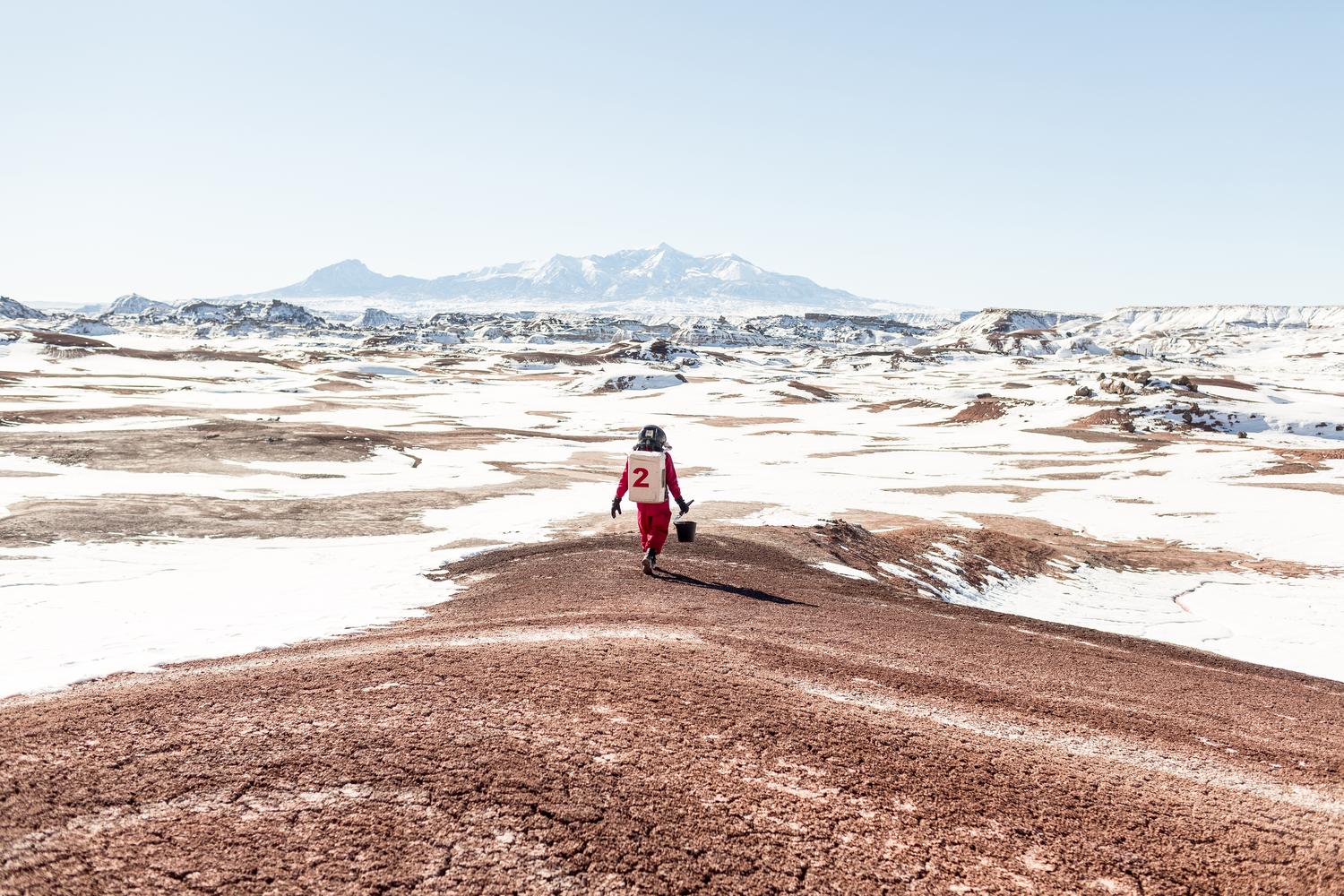 In the Utah desert, scientists live and work at the Mars Desert Research Station. The terrain’s ferrous-red hue and the harshness of the climate are supposed mimic Mars’s. Each crew carries out experiments ranging from astrobiology and meteorite analysis to 3D-printing and social psychology.

HBO Vice, the network’s award-winning news program, will broadcast a 15-minute report about current planning for a human mission to Mars on Friday, July 1st at 11:00 pm EDT (8:00 pm PDT). The segment will include a visit to the Mars Society’s Mars Desert Research Station in Utah, which took place last December during the field rotation of Crew 158. The program can be viewed on television, but can also be seen online via HBO GO immediately after the show is aired.

The 2016 University Rover Challenge concluded on Saturday (June 4th) at the Mars Society’s Mars Desert Research Station (MDRS) in southern Utah as 28 rovers and more than 300 college students took on the harsh Mars-like terrain of this unique venue. Following two rounds of competition and five different events over a three-day period, the Legendary Rover Team from Rzeszow University of Technology in Poland defended their title from 2015 with another amazing victory.

The podium was rounded out by the second place WSU Everett Engineering Club from Washington State University Everett and third place Continuum team from the University of Wroclaw in Poland. The WSU team’s performance was particularly amazing in light of the fact that this was their first year attending this ambitious contest. This year’s entire field of student participants was extremely well prepared and ready to compete. While the nearly-flawless performance of the Legendary Rover Team separated them from the second place finisher by 82 points, second through ninth place were separated by only a mere 78 points.

The international robotics competition for college students, which is part of the Mars Society’s Rover Challenge Series, featured an elite field of teams vying to build the world’s best student-designed Mars rover. A record 63 teams from 12 countries took part in URC2016. Following a rigorous two-stage down-select process 30 teams were invited to the field competition at MDRS. 28 teams from seven countries (both records for URC) arrived with their rovers ready for the exciting challenges in the Utah desert.

NASA may believe that it’ll be the first to land humans on Mars, but don’t tell that to Las Vegas betting houses. Popular Mechanics has asked Docsports’ Raphael Esparza to set odds for the first organization to put people on Mars, and he believes that SpaceX stands a much better chance of reaching the Red Planet (5 to 1) than anyone else, including NASA (80 to 1). To put it bluntly, SpaceX has the money and the motivation that others don’t — NASA would be the favorite, but its budget cuts are holding it back.

The Mars Society launched today an online crowdfunding campaign – via Indiegogo.com – to help raise $10,000 to rebuild and refurbish the green house used at the organization’s Mars Desert Research Station (MDRS) in southern Utah to carry out food and plant research important for eventual human exploration and settlement of the Red Planet.

The MDRS green house (commonly referred to as the GreenHab) was severely damaged by fire late last year, with MDRS staff determining that the facility was unfit for further use and needed to be completely rebuilt.

Plans to restore the new GreenHab include building a geodesic dome designed to house an assortment of food gardens and science experiments. More efficient, easier to use and healthier for plants, the new structure will ensure that plant and food research remain a key aspect of the overall MDRS simulation program.

A generous donation immediately following the GreenHab fire in December allowed the Mars Society to cover the cost of a temporary grow tent for plant research during the remainder of the 2014-15 field season and also purchase materials to build the new GreenHab dome structure.

Since then, Mars Society staff and volunteers have constructed a small sample geodesic test unit and completed a work trip to MDRS this past weekend to lay the building foundation, with plans to return to the Utah site in September to build the new dome in time for the upcoming crew field season, which begins in mid-October.

Two MIT engineering students just faced off with a private company that wants to send people on a one-way trip to Mars — and one group won by a landslide.
The debate stemmed from the students’ scathing critique of Mars One’s plan to set up a permanent human colony on Mars. That report, published in 2014, triggered widespread criticism of the company’s too-low $6-billion budget, unrealistic timeline, and general lack of preparedness for the challenges of Mars.