NASA’s Mars Atmosphere and Volatile Evolution (MAVEN) mission has identified the process that appears to have played a key role in the transition of the Martian climate from an early, warm and wet environment that might have supported surface life to the cold, arid planet Mars is today.

MAVEN data have enabled researchers to determine the rate at which the Martian atmosphere currently is losing gas to space via stripping by the solar wind. The findings reveal that the erosion of Mars’ atmosphere increases significantly during solar storms. The scientific results from the mission appear in the Nov. 5 issues of the journals Science and Geophysical Research Letters.

“Mars appears to have had a thick atmosphere warm enough to support liquid water which is a key ingredient and medium for life as we currently know it,” said John Grunsfeld, astronaut and associate administrator for the NASA Science Mission Directorate in Washington. “Understanding what happened to the Mars atmosphere will inform our knowledge of the dynamics and evolution of any planetary atmosphere. Learning what can cause changes to a planet’s environment from one that could host microbes at the surface to one that doesn’t is important to know, and is a key question that is being addressed in NASA’s journey to Mars.” Mars Missions to Pause Commanding in June, Due to Sun

In June 2015, Mars will swing almost directly behind the sun from Earth’s perspective, and this celestial geometry will lead to diminished communications with spacecraft at Mars.

The arrangement of the sun between Earth and Mars is called Mars solar conjunction. It occurs about every 26 months as the two planets travel in their sun-centered orbits. The sun disrupts radio communications between the planets during the conjunction period. To prevent spacecraft at Mars from receiving garbled commands that could be misinterpreted or even harmful, the operators of Mars orbiters and rovers temporarily stop sending any commands.

Blue Aurorae in Mars’ Sky Visible to the Naked Eye

For the first time, an international team of scientists from NASA, the Institute of Planetology and Astrophysics of Grenoble (IPAG), the European Space Agency and Aalto University in Finland, have predicted that colorful, glowing aurorae can be seen by the naked eye on a terrestrial planet other than Earth — Mars.

Visible Martian aurorae seemed possible after the SPICAM imaging instrument on-board the ESA satellite Mars Express spotted aurorae from space in 2005. Those observations were confirmed in March 2015 by the NASA-led MAVEN mission, which completed 1,000 orbits around the red planet on April 6, 2015.

Through laboratory experiments and a physical numerical model developed at NASA and IPAG, the study shows that, on Mars, aurorae also occur in the visible range. The most intense color is deep blue. As on Earth, green and red colors are also present. Several times during a solar cycle, after intense solar eruptions, these lights are bright enough to be seen with the naked eye.

MAVEN completed 1,000 orbits around the Red Planet on April 6, four-and-a-half months into its one-year primary mission.

MAVEN is in its science mapping orbit and has been taking data since the start of its primary mission on Nov. 16, 2014. The furthest point in the spacecraft’s elliptical orbit has been 6,500 kilometers (4,039 miles) and the closest 130 kilometers (81 miles) above the Martian surface.

“The spacecraft and instruments continue to work well, and we’re building up a picture of the structure and composition of the upper atmosphere, of the processes that control its behavior, and of how loss of gas to space occurs,” said Bruce Jakosky, MAVEN’s principal investigator from the University of Colorado’s Laboratory for Atmospheric and Space Physics in Boulder.

MAVEN was launched to Mars on Nov. 18, 2013, from Cape Canaveral Air Force Station in Florida. The spacecraft successfully entered Mars’ orbit on Sept. 21, 2014.

In its examination of the planet’s thin atmosphere, the probe captured images of a high altitude dust cloud and an aurora deep in the Martian atmosphere.

The discoveries have captivated the field of planetary science, as their origins are beyond the current understanding of Mars’s atmospheric processes.

MAVEN, an acronym that stands for Mars Atmosphere and Volatile Evolution and intentionally harkens to the English word for an expert in a field who seeks to bestow knowledge onto others, was launched in the fall of 2013 and reached Mars’s orbit in September 2014. 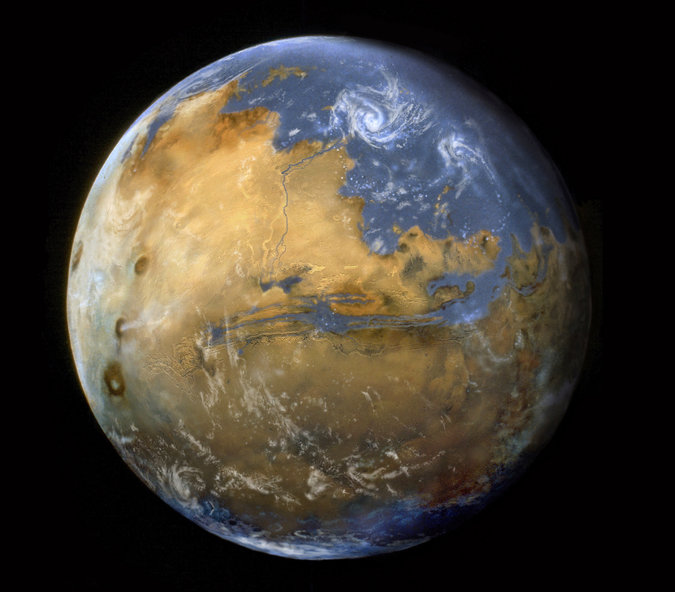 The newest node in NASA’s Mars telecommunications network — a radio aboard the MAVEN orbiter custom-designed for data links with robots on the surface of Mars — handled a copious 550 megabits during its first relay of real Mars data.
MAVEN’s Electra UHF radio received the transmission from NASA’s Curiosity Mars rover on Nov. 6, using an adaptive data rate as the orbiter passed through the sky over the rover. The data that MAVEN relayed to NASA’s Deep Space Network of large dish antennas on Earth included several images of terrain that Curiosity has been examining at the base of Mars’ Mount Sharp. The test also included relaying data to Curiosity from Earth via MAVEN. 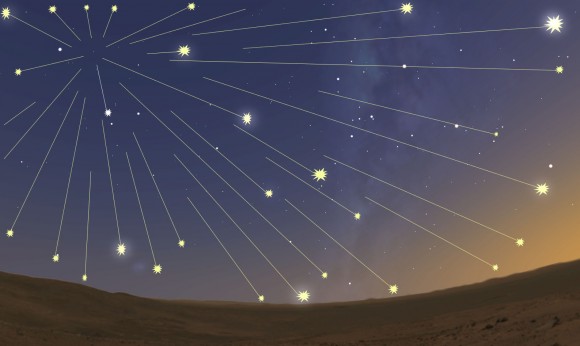 “Thousands of meteors per hour would have been visible — truly astounding to the human eye.” That’s Nick Schneider’s description of what you and I would have seen standing on Mars during Comet Siding Spring’s close flyby last month. “It would have been really mind-blowing,” he added. Schneider is instrument lead for MAVEN’s Imaging Ultraviolet Spectrograph (IUVS). He and a group of scientists who work as lead investigators for instruments on the MAVEN and Mars Reconnaissance Orbiter (MRO) spacecraft shared the latest results from the comet flyby during a media teleconference earlier today. There were many surprises. Would we expect anything less from a comet?