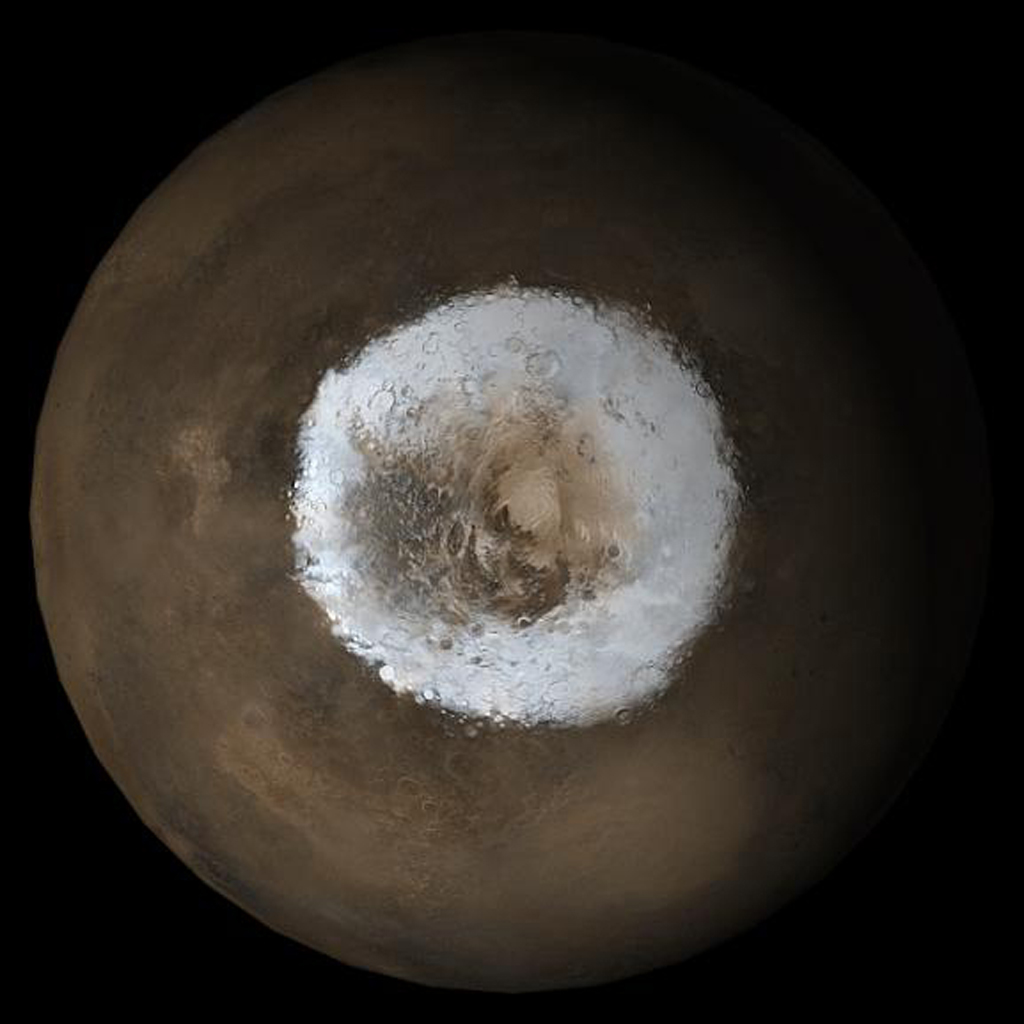 31 May 2005
This picture is a composite of Mars Global Surveyor (MGS) Mars Orbiter Camera (MOC) daily global images acquired at Ls 211° during a previous Mars year. This month, Mars looks similar, as Ls 211° occurred in mid-May 2005. The picture shows the south polar region of Mars. Over the course of the month, additional faces of Mars as it appears at this time of year are being posted for MOC Picture of the Day. Ls, solar longitude, is a measure of the time of year on Mars. Mars travels 360° around the Sun in 1 Mars year. The year begins at Ls 0°, the start of northern spring and southern autumn.

A new study from Caltech suggests that the theory, developed by physicist Robert B. Leighton (BS ’41, MS ’44, PhD ’47) and planetary scientist Bruce C. Murray, may indeed be correct.

Carbon dioxide makes up more than 95 percent of Mars’s atmosphere, which has a surface pressure of only 0.6 percent that of Earth. One prediction of Leighton’s and Murray’s theory—with enormous implications for climate change on Mars—is that its atmospheric pressure would swing in value as the planet wobbles on its axis during its orbit around the sun, exposing the poles to more or less sunlight. Direct sunlight on the CO2 ice deposited at the poles leads to its sublimation (the direct transition of a material from a solid to a gaseous state). Leighton and Murray predicted that, as exposure to sunlight shifts, atmospheric pressure could swing from just one-quarter that of today’s Martian atmosphere to twice that of today over cycles of tens of thousands of years.

Now, a new model by Peter Buhler (PhD ’18) of JPL, which Caltech manages for NASA, and colleagues from Caltech, JPL, and the University of Colorado, provides key evidence to support this. The model was described in a paper published in the journal Nature Astronomy on December 23.

The team explored the existence of a mysterious feature at the south pole of Mars: a massive deposit of CO2 ice and water ice in alternating strata, like the layers of a cake, that extend to a depth of 1 kilometer, with a thin frosting of CO2 ice at the top. The layer-cake deposit contains as much CO2 as in the entire Martian atmosphere today. By tracking the gravitational pull on spacecraft over Mars, NASA has created one of the most detailed maps yet of the Red Planet’s surface, and what lies beneath.

“Gravity maps allow us to see inside a planet, just as a doctor uses an X-ray to see inside a patient,” Antonio Genova of the Massachusetts Institute of Technology (MIT) said in a statement.
“The new gravity map will be helpful for future Mars exploration, because better knowledge of the planet’s gravity anomalies helps mission controllers insert spacecraft more precisely into orbit about Mars.”
As well as providing insight for future missions, the gravity map also offers explanations for developments in the planet’s past.

As Comet C/2013 A1 Siding Spring hurtles toward Mars, NASA is taking steps to protect its Martian orbiters. The plan? Use the planet itself as a shield between the spacecraft and the comet’s potentially dangerous debris.
As part of its long-term Mars Exploration Program, NASA currently has two spacecraft orbiting the Red Planet, Mars Reconnaissance Orbiter (MRO) and Mars Odyssey, with Mars Atmosphere and Volatile Evolution (MAVEN) set to arrive in late September. Teams of scientists at the University of Maryland, the Planetary Science Institute, and NASA’s Jet Propulsion Lab (JPL) have used data from both Earth-based and space telescopes to model Siding Spring’s journey through the inner solar system, and determined that there is no risk of the comet colliding with Mars. However, at its closest approach to Mars on October 19, 2014, Siding Spring will come within 82,000 miles of the Red Planet, which is about a third of the distance from Earth to the Moon. The closest comets ever to whiz by Earth have been at least ten times more distant.

The Phobos Monolith The Economic Voice

We have all seen the famous humanoid face-shaped rock from mars but we know it’s not real, these images and shapes are caused by natural erosion due to the weather patterns and, if you look hard enough and long enough, you will find whatever your mind wants to find, from human faces to pyramids.
I myself am not a lunatic, neither do I believe in conspiracy theories, I believe in mathematics and science but I still have an open mind. Something though caught my attention yesterday, whilst watching an interview from last year with Buzz Aldrin. He spoke about space travel and the reasons we should be going back to the moon and even landing on asteroids. I know it was probably a lot of spin to get people talking about and therefore funding space travel, but what he said next definitely got my attention. He spoke about the moons of Mars, saying that on the moon Phobos there is a monolith and that when people see this they will start asking questions about it, some will say God put it there and others will say the universe put it there. These were his words and there is a definite glint in his eye when he speaks about the monolith.

The Mars Global Surveyor (MGS) is a NASA mission that arrived at Mars in September, 1997, and for nine years circled the planet every two hours in a polar orbit (that is, traveling from the north pole to the south pole and back) at an altitude of 400 kilometers (249 miles) above the Martian surface. MGS went silent in November, 2006. It carried a suite of five instruments designed to study the entire Martian surface, atmosphere, and interior, and their datasets have provided astronomers with a wealth of information about the climate and atmosphere of Mars. The results are not only interesting to students of Mars. As astronomers discover new extrasolar planets, and as Earth-based meteorologists test the realism of their atmospheric models, the results of meteorological analyses of another planet besides Earth provide an important reference.

Unusual Gullies and Channels on Mars

What could have formed these unusual channels? Inside Newton Basin on Mars, numerous narrow channels run from the top down to the floor. The above picture covers a region spanning about 1500 meters across. These and other gullies have been found on Mars in recent high-resolution pictures taken by the orbiting Mars Global Surveyor robot spacecraft. Similar channels on Earth are formed by flowing water, but on Mars the temperature is normally too cold and the atmosphere too thin to sustain liquid water. Nevertheless, many scientists hypothesize that liquid groundwater can sometimes surface on Mars, erode gullies and channels, and pool at the bottom before freezing and evaporating. If so, life-sustaining ice and water might exist even today below the Martian surface — water that could potentially support a human mission to Mars. Research into this exciting possibility is sure to continue!

What does Earth look like when viewed from Mars? At 13:00 GMT on 8 May 2003, the Mars Global Surveyor (MGS) Mars Orbiter Camera (MOC) had an opportunity to find out. In addition, a fortuitous alignment of Earth and Jupiter—the first planetary conjunction viewed from another planet—permitted the MOC to acquire an image of both of these bodies and their larger satellites. At the time, Mars and the orbiting camera were 139 million kilometers (86 million miles) from Earth and almost 1 billion kilometers (nearly 600 million miles) from Jupiter. The orbit diagram, above, shows the geometry at the time the images were obtained.
Because Jupiter is over 5 times farther from the Sun than Earth, two different exposures were needed to image the two planets. Mosaiced together, the images are shown above (top picture). The composite has been highly contrast-enhanced and “colorized” to show both planets and their satellites. The MGS MOC high resolution camera only takes grayscale (black-and-white) images; the color was derived from Mariner 10 and Cassini pictures of Earth/Moon and Jupiter, respectively.