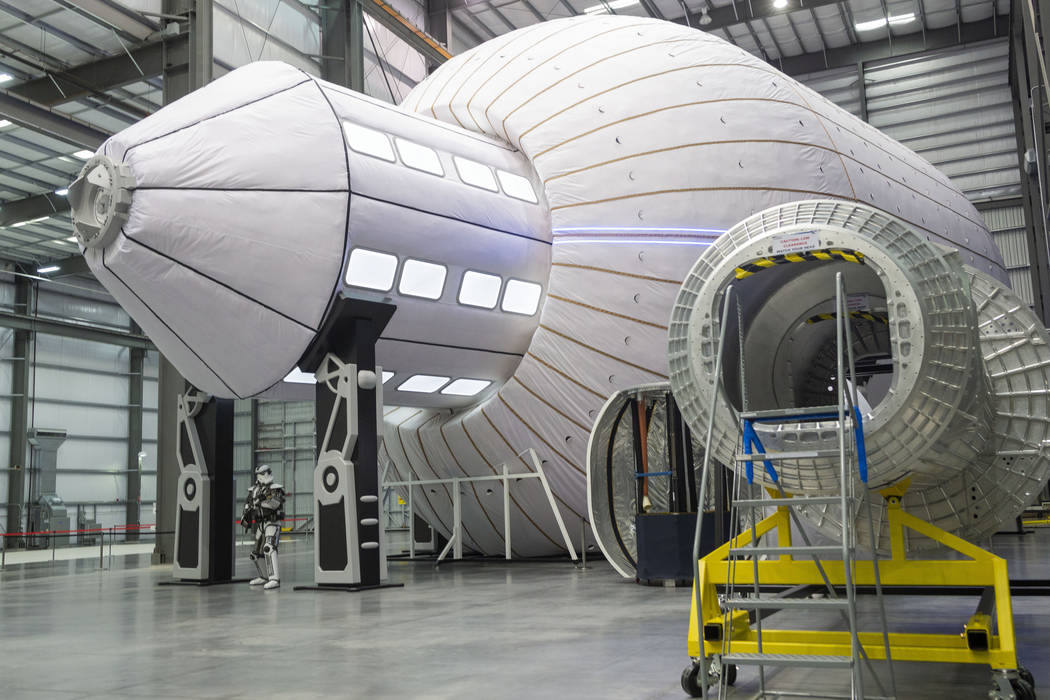 Robert Bigelow is working to make sure the pathway to Mars runs through North Las Vegas.

Bigelow and his Bigelow Aerospace manufacturing facility played host to eight NASA astronauts and 60 engineers this week — some spending several days getting to know the company’s B330 autonomous, expandable space station.

The versatile inflatable module can be used as a transport vehicle on a lengthy space voyage, and can be attached by airlock to existing space stations or serve as a base of operations on a planet surface or the moon.

Bigelow and his staff hosted reporters Thursday to show off a mock-up of the B330 and provide updates on other Bigelow projects, including the Bigelow Expandable Activity Module (BEAM), which recently observed its third anniversary attached to the International Space Station.

The company also showed off Olympus, Bigelow’s massive space station prototype that’s only in concept stages today, but for which there is a life-size model within the production facility.

“We’re in competition with other companies that are going through this testing process where NASA has been sending in their astronauts to critique the good, the bad and the ugly of companies’ hardware, their enclosures, their architecture and whatever and that’s the process we’re going through,” Bigelow said in a briefing.

Bigelow said the company has made modifications based on the astronauts’ comments, changing a handhold grip or slide-out seating here or there. 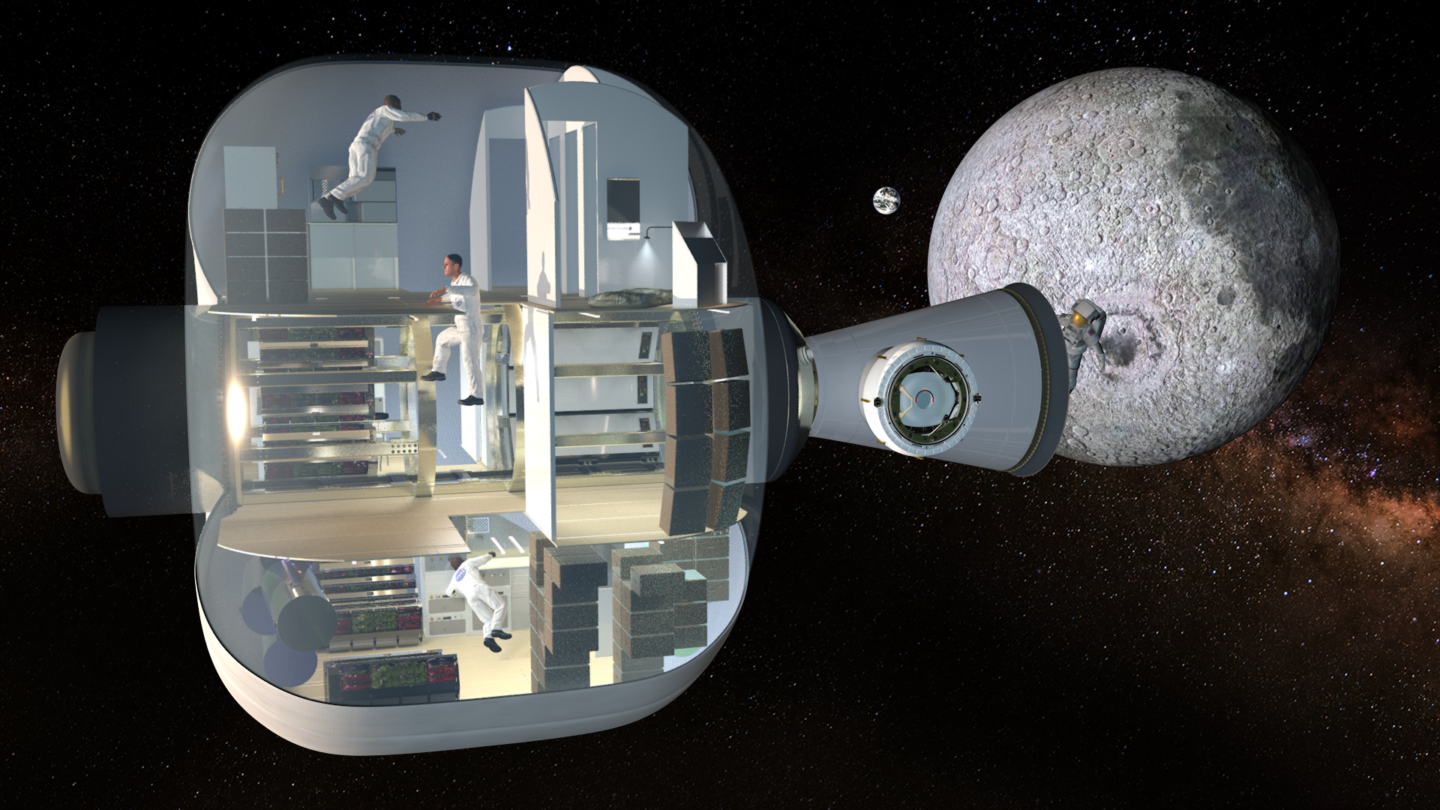 There are three stories inside the module. – Sierra Nevada Corporation

On Wednesday, Sierra Nevada Corporation—the company that makes aerospace equipment, not beer—showed off its proposed in-space habitat for the first time. The inflatable habitat is, first and foremost, large. It measures more than 8 meters long, and with a diameter of 8 meters has an internal volume of 300 cubic meters, which is about one-third the size of the International Space Station.

Sierra Nevada developed this full-scale prototype under a NASA program that funded several companies to develop habitats that could be used for a space station in orbit around the Moon, as well as potentially serving as living quarters for a long-duration transit to and from Mars. As part of the program, NASA astronauts have, or will, spend three days living in and evaluating the prototypes built by Sierra Nevada, Boeing, Lockheed Martin, Northrop Grumman, and Bigelow Aerospace.

The selling point for Sierra Nevada’s habitat is its size, which is possible because the multi-layered fabric material can be compressed for launch, then expanded and outfitted as a habitat once in space. It can fit within a standard payload fairing used for launch vehicles such as SpaceX’s Falcon Heavy rocket, United Launch Alliance’s Vulcan booster, or NASA’s Space Launch System. It is light enough for any of those rockets to launch to the Moon.

Fungus may be the key to colonizing Mars The thought of colonizing Mars has science fiction aficionados, scientists, and billionaire entrepreneurs staring up at the night sky with renewed wonder and inspiration. But the key to achieving the lofty goal of colonizing and building extensively on a new planet may not exist out among the stars, but under our feet right here on Earth.

Christopher Maurer, an architect and Founder of Cleveland-based Redhouse Studio, and Lynn Rothschild, a NASA Ames researcher, believe algae and mycelium (the vegetative part of a fungus that consists of a network of fine white filaments) may make the perfect building material on Mars.

The algae, which would act as the food supply for the fungus, and mycelium spores would be packed into a flexible plastic shell where it would be watered and coaxed to grow, providing structure for the shell and filling it out almost like air fills out a bouncy castle.

Future Mars Residents May Live in a Home Made of Ice

Want to Live on Mars? We have the ice house for you. NASA is crowd-sourcing ideas for future Martian habitats and the leading design is essentially a modified igloo. That’s right, the first humans to inhabit Mars, may reside in homes made of ice.

Last month, a research team from the University of Texas announced that Mars is hiding a secret supply of water just below its surface. They reported that a region on Mars known as Utopia Planitia is harboring as much water as Lake Superior here on Earth — only difference is the Martian reserves are frozen solid.

The ice reservoir is located a mid-northern latitudes — which means it’s about halfway between the equator and the poles — and is reportedly the size of New Mexico. Even though the supply may be buried under a layer of regolith ranging from 3 to 33 feet deep, this finding is still excellent news for a group at NASA’s Langley Engineering Design Studio in Hampton, Virginia.

NASA has executed a contract with Bigelow Aerospace for the company to develop ambitious human spaceflight missions that leverage its innovative B330 space habitat. The contract was executed under the Next Space Technologies for Exploration Partnerships (“NextSTEP”) Broad Agency Announcement issued by NASA’s Advanced Exploration Systems program.

Via its NextSTEP contract, Bigelow Aerospace will demonstrate to NASA how B330 habitats can be used to support safe, affordable, and robust human spaceflight missions to the Moon, Mars, and beyond. As the name indicates, the B330 will provide 330 cubic meters of internal volume and each habitat can support a crew of up to six. Bigelow expandable habitats provide much greater volume than metallic structures, as well as enhanced protection against radiation and physical debris. Moreover, Bigelow habitats are lighter and take up substantially less rocket fairing space, and are far more affordable than traditional, rigid modules. These advantages make the B330 the ideal habitat to implement NASA’s beyond low Earth orbit (“LEO”) plans and will support the utilization of transportation systems such as the SLS and Orion. Additionally, the B330s, which will initially be deployed and tested in LEO, will be used as private sector space stations that will conduct a wide variety of commercial activities.

NASA is giving university and college students an opportunity to be part of the agency’s journey to Mars with the Breakthrough, Innovative, and Game-changing (BIG) Idea Challenge.

“NASA is currently developing and flight testing HIADs — a new class of relatively lightweight deployable aeroshells that could safely deliver more than 22 tons to the surface of Mars,” said Steve Gaddis, GCD manager at NASA’s Langley Research Center in Hampton, Virginia. “A crewed spacecraft landing on Mars would weigh between 15 and 30 tons.”

As NASA and other space agencies continue humanity’s interplanetary reconnaissance, one thing is becoming very clear: on balance, the solar system is a rather soggy place. Water, mostly in the form of ice, lurks practically everywhere we look. There are water deposits on the Moon, on Mars, and even in the cold, shadowed floors of deep polar craters on sun-broiled Mercury. Water exists in even greater abundance further out from the sun, constituting much of the crust for a wealth of dwarf planets, moons, and asteroids and even occasionally forming subsurface oceans.

Planetary scientists speak often and with great eloquence about how all this water boosts the possibility of alien life right in our solar system; much less discussed is how it boosts the possibility of carrying human life far beyond Earth. Water will be a cornerstone of our existence everywhere we go, of course, perhaps in more ways than you realize. The killer app for all that extraterrestrial water isn’t just beverages and baths—it’s also rocket fuel.

For generations there have been discussions about the next step in space exploration with a new focus on reaching and populating Mars. There are now many opportunities upon us with organisations such as NASA, the primary investigator, and Mars One the organisation co-founded by Dutch entrepreneur Bas Lansdorp, seeking out and developing technologies.

The big question is: can science fiction become science reality?

DesignCurial talks to internationally recognised space architects Guillermo Trotti, president of Trotti & Associates, and Brent Sherwood, programme manager at the NASA Jet Propulsion Laboratory (JPL), who give us an idea of what our homes on Mars would look like and how soon this might happen.

Trotti has contributed significantly to NASA, including working on the International Space Station (ISS), lunar bases, Mars vehicles and more, with Sherwood having 28 years professional experience in the civil and commercial space industry.

The LDSD launch support team is go to report to stations tonight at 9 p.m. HST to begin preparations for a Monday, June 8, 7:30 a.m. HST (1:30 p.m. EDT) launch attempt from the U.S. Navy Pacific Missile Range Facility on Kauai, Hawaii. NASA Television and JPL’s Ustream channel will carry live coverage of the launch beginning at 7 a.m. HST (1 p.m. EDT). The LDSD crosscutting technology demonstration mission will test two braking technologies that will enable larger payloads to be landed safely on the surface of Mars or other planetary bodies with atmospheres, including Earth.

Mars is a freezing, desolate desert seemingly devoid of life. Yet humanity will be in much better shape after we colonize it.

This feat, however, will not be easy. The first steps will likely begin with return missions from Mars back to Earth. And only after we’ve proven that we can safely transport, land, and launch people from Mars, will we begin considering the possibility of establishing small, permanent colonies there.

Before either of those things can happen, however, scientists first need to make sure we can afford these missions and, more importantly, prove that we have the technology to safely get people to Mars and back.

There are ten projects that are currently underway which should help us move forward with missions to Mars. Based on the ground and in space, these projects are pushing the boundaries of technology and human psychology, physiology, and ingenuity.